The French Press gets a bad wrap sometimes.  In specialty coffee it’s often the poor cousin to V60’s, Chemexes, and Kalita’s.  It certainly brews a very different cup than all of these devices.

Up until a year ago I viewed the French Press as a sub-par device that only produced very muddy and bitter cups.  That was until I learned that every single French Press I’d been served or made myself had been done wrong.

These may be some broad generalisations, but when you think about the average household pulling out the French Press to make a gourmet coffee when they don’t want to serve their guests instant, it’s usually

I’ve been totally guilty of doing this myself time and time again.  And therein lies the explanation to why I never liked French Press coffee.  It all makes sense with a little understanding of particle size and extraction.

The filter attached to the plunger on a French Press is quite coarse meaning the finely ground store-bought coffee will pass right through.  This results in a very gritty cup full of unwanted sediment.

The smaller surface area of the finer grind also speeds up the extraction process.  Brewing for a few minutes with all that extra surface area exposed to the water will over-extract the coffee in no time giving a very bitter and charred tasting cup.

Another common mistake is that the coffee isn’t decanted once brewed which means the grinds at the bottom keep extracting long after the first cup has been poured.  Any subsequent cups poured later will taste nothing like the first.

So the key to a great French Press is:

I recently shopped for a more convenient way to boil water on the trails.  Up until now I had always hiked with a Trangia (which I still love) but it’s bulky and requires carrying a bottle of liquid fuel.  After doing some homework I settled on the Jetboil.  It appealed to me for all it’s self-contained glory.  The gas canister, burner head, canister stabiliser, cup, and lid all pack down into itself in one super-portable little package.

I’ll be honest though….the real reason I chose the Jetboil was because you can get a French Press add-on for it.  It meant I could take one extra brew method  on the trails without taking up any extra space.

The model I bought was the smaller of their range; the Zip.  It’s an 800mL cup that comes with the basic match ignition burner as opposed to the models above it that are piezo ignition.  I wish I had remembered this on my first attempt at brewing with it on a day hike.  I forgot matches.  I debated making a cold brew but had to be back to pick the kids up from school in 6hrs.

The first chance I had to test out the French Press functionality was on a walk to Seven Acre Rock.  I had planned on riding there from Mt Beenak but it was wet and very cold and it would appear I’m getting softer the older I get.

The walk from the car park to the lookout is a little under 1km and pretty easy going.  After all the rain the track was very muddy and slippery.  I got all excited at one point after seeing some huge cat-looking prints in the mud….the Gembrook / Beenak area has long been rumoured for its big cat sightings.  Google disagreed and told

me they were dog prints.  But being that they were huge, fresh, and there were no other human foot prints around it meant the dog was big, feral, and here I was out on my own in the middle of nowhere……

The wind out on the rock was bitterly cold and at times had a bit of force behind it.  I was curious to know how the Jetboil would perform in these circumstances.

One advantage of the Jetboil in this regard is that the burner head is slightly sheltered by design and the Flux-Ring around the bottom of the cup adds some extra protection too.  This Flux-Ring (the ridged metal heat conductor attached underneath the cup) adds to the effectiveness in the cold as it evenly disperses the flames heat to the whole cup.  Also, the Jetboil comes with an insulated cover which not only holds in the heat while boiling, but means it’s cool to the touch for handling.  Great design all round.

The beauty of a French Press is that you can get nice results from both filter and espresso roasts.  The beans I had brought were an espresso-roasted Kenyan Kii AA from Industry Beans in Fitzroy, Melbourne.  Pulled as an espresso shot, this is a super-juicy and sweet coffee that I have found goes well straight or with milk.

I ground 28g for a 1:15 420g brew.  The Jetboil did it’s thing in amazing time considering the 5 degrees temp plus wind chill.  I did find that I had to set it up against my coffee case as the wind played havoc with the flame.

A 30 second bloom and 3 and a half minutes later, down went the plunger and the taste testing began.  I wasn’t sure how much sediment the Jetboil press would let through as the metal 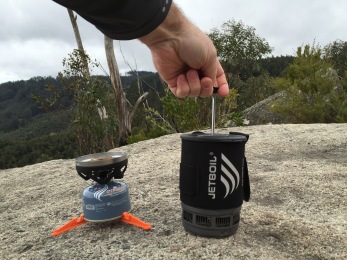 filter is surrounded by a plastic ring that looked like it may let some grinds through.

The result was the familiar French Press heavy mouth feel full of sweetness and plum-like juiciness.  Overall it was a little weaker than I’d like and next time I’ll try a 1:13 ratio for more strength.

Regardless, in the cold it went down a treat.  Money well spent on the Jetboil and I know it will feature heavily on future third wave adventures. 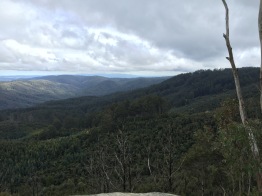